One of your bulbs just broke or burned out. You want to get an energy saving light bulb but which typically lasts the longest all while giving you the best quality light? And more importantly, which will put the most money back in your wallet?

Nowadays people know about energy saving and they don't go for Incandescent bulbs anyways as it consumes too much of power. Imagine how much you have to pay for the electricity bill if you fit incandescent bulb for all rooms.

So we have two options - CFL or LED. Let us go deeper to find which one is better.

CFLs use 25-35% less energy than incandescent bulbs, but if you really want to make the biggest environmental impact on the environment, choosing LEDs is the way to go. Residential LEDs, especially those rated by ENERGY STAR, use 75% less energy and last 25 times longer than incandescent lighting. Energy.gov notes that by 2027 widespread use of LEDs could save about 348 TWh of electricity, the equivalent of the annual electrical output of 44 electric power plants (1000 megawatts each). In terms of energy consumption LED is way ahead CFL.

An LED running with power consumption 7W is more cost efficient than a CFL operating at 14 w power Consumption. So, LED outsmarts CFL in this aspect.

Something else consumers need to understand while analyzing CFL vs LED bulbs is the difference between lumens and watts. Consumers are used to buying light bulbs based on watts, or how much energy they consume. It didn’t matter how much light (lumens) they provided. Now, as a way to differentiate LED vs CFL bulbs, manufacturers are classifying the new energy-efficient bulbs by their lumens. You are buying your bulb based on the amount of light you want rather than the energy used by the bulb.

Admittedly, it can be confusing. Here’s the basic point to keep in mind: More lumens equals more brightness. When shopping for your next light bulb, simply find the lumen output you’re looking for (the bigger the brighter) and choose the bulb with the lowest wattage (the lower the better).

Coming to the lifespan of the bulbs, With an astonishing lifespan of 25,000 hours, LED light bulbs are the undisputed, heavyweight champion in longevity. The next best are CFL bulbs which bring in a respectable 8,000 hours of average life expectancy. Keep in mind, most tests are based on a running time of 3 hours per day.
Lifetime of LED is 25,000 hours and frequency of stands at 1 bulb/25,000 watts, Whereas lifetime of CFL is 8,000 hours and frequency of replacement stands at 4 bulbs/8,000 hours ,says a survey. 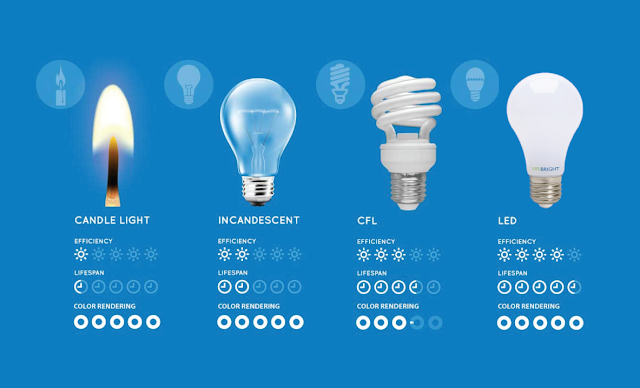 In short form, here are the answers: CFL is the curly light bulb and LED is the long light bulb. And, in the CFL vs LED battle for energy efficiency, the LED light benefits make it a winner, hands down. In terms of brightness too, LED is a better option.

Hence, LED wins over CFL in every important aspect.

Choose LED because they,

In recent times, this Blockchain technology elevated quickly. I hear people talking about Bitcoins and such cryptocurrencies when concerned about blockchain. But are they the same thing? What’s the need for blockchain

The Tech Cache
—
LED vs. CFL: Confused still ?
Share this