In this blog post I will shed light upon how to branch,fork and making a
pull request in Github.

Disclaimer: I am not a subject expert on git and I am
sharing my findings as I learn more about this myself.

Before reading this post on forks and branches I want you to
be thorough with the basics of Git.There is a lot of good content in the
Internet regarding git and I have my own content here.
So give it a read before proceeding.

After reading about git and other basic functionalities in git , a noob
may come to a conclusion that github is just another online cloud where you
can store computer code and access them whenever and wherever he wants it.
No it's more than that.Branches and forks help people to collaborate on
the work they do.

What is a branch

Branches in github are used for intra repository collaboration.It is highly helpful when a
large number of people are involved in a bigger project and the work is divided more or less
equally between the collaborators.The default and the only working branch in a newly created
repository is the master branch. 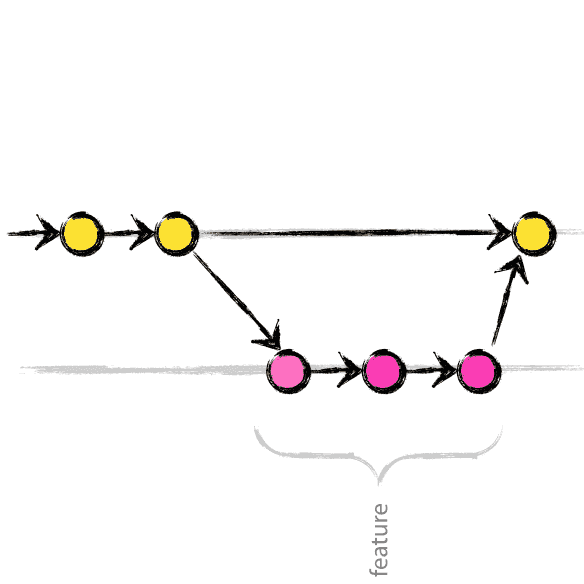 Branches are very helpful when there is a group project and multiple collaborators are involved.The master branch contains the main workflow.The collaborators are consulted and the whole project is divided into multiple sub tasks with each member getting
a small task.Each member then creates a separate branch of their own , make changes to the code and run and test them.When they feel that their subtask is complete and all the features are implemented , they ask the master to merge their branch to master branch.The master receives multiple merge requests since there are multiple collaborators involved.He checks each and every branch and merges them.If there is a bug while merging a branch then he sends it back with necessary comments to make the change and he doesn't merge that branch.

What a boring story , huh? But I am sure every girl reading this post would have made these kind of helps and I request you to continue doing them. In the maggi example, the entire maggi pack that Asha had was the master branch. Kalpana & Anita made their own branches from the master maggi branch and made changes to them. The changes made in the branches are independent of each other and also the master branch.

After adding some changes to their branch they would ask Asha ,
whether the changes can be merged to the master maggi branch she had.
Asha will check whether the addition of branches to the master branch would be helpful and merges them independently.

Let's talk some git here. You can create a branch in the current project and work on it by following this easy procedure.

Navigate to the main page of the repository. Click the branch selector menu and type a name
for the new branch and press enter.

Open the terminal and type the following command to clone the entire repository and change the current working branch to the
newly created branch.

Now you can start working on your branch. After making some changes and tweaking the code to make it work , you can push
it online using the following command.

Merging branches is very important and the project leader must be very careful before merging branches.In the main page of the
repository click compare to compare any two branches. The leader can see the additions and deletions with the numbers associated with them.He should test the code before merging. After checking for any nasty or little bugs , he can click merge and the branches
will be merged.

What is a Fork

Forks in github are used for inter repository collaboration.After forking and improving the code , a pull request is made and the owner of the original repository accepts the pull request and the new changes are reflected in his code.

Aashika is working on the latest assignment her mam gave in the class. Sushmitha is a friend of Aashika and is also from the same class.Aashi being a perfectionist completes the job and open-sources her homework notes for everyone to copy. Sush forks a copy of Aashi's notes.She thinks she would get additional marks if she writes some extra points and corrects some inaccuracies in Aashi's notes.So she makes those changes and tells Aashika those changes.Sushmitha basically proposes a pull request to Aashi's original notes.Aashika accepts those changes and improves her notes.

IMPORTANT NOTE : The changes made in the original repository are not reflected on the forks automatically.Suppose if another girl Bhargavi copies the homework from Aashika at 8PM and goes to sleep , Sush adds something and submits a pull request to Aashika at 9PM then Bhargavi would have had only the previous version of Aashi's notes.There are git commands to sync your forked repo with the original one but it is beyond the scope of this article.

Steps to fork a repo

After forking is done , navigate to your profile and you would find a copy of the repository in your profile.You can play with
it and do whatever you want with it.

After making changes to the code in your profile , do the following steps to submit a pull request

After submitting the pull request , the owner of the original repo will review those changes and accepts those pull requests.

"There are three responses to a piece of design – yes, no, and WOW! Wow is the one to aim for.” -Milton Glaser To make your website look WOW!, tweaking some of the

For all Sherlock Holmes fans out there, Ever wondered if Sherlock Holmes could be real? Well it's possible, not the real psychopath though, but a virtual one. Lets call it the big data

The Tech Cache
—
How to Git Part 2
Share this