It was a creepy movie and I was waiting for the interval. My phone made a noise and when I unlocked it, all I found was this text message. 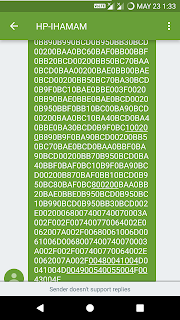 I had no idea what it is, and where it came from. I had many thoughts on my mind, as it may be from aliens, or may someone had hacked a database and sending rubbish messages to all the contacts in it. I got more involved in the message than the movie. The inner detective wanted to find it's meaning and I thought of decoding it. I starred at the message and then realised it was in Hexadecimal. Immediately found an online Hexadecimal to string converter tool and pasted the message there. The decoded string read

Again it was a rubbish, but there I found some readable text. It was a URL.
Actually two were there.
http://twd.bz/hamam
http://twd.bz/HAMAMITUOCO
Both were not working. Nothing could be found as it responded with a empty HTML tags. so I thought this could be sent by any mistake or still it can be a hacker.
I was left with the only option to trace the sender. After the movie, Googled for finding the SMS gateway provider with Address HP-IHAMAM as in the message.

From the info, I got to know that the SMS address was registered for Advertising purposes. I thought i could get any clue by finding the registration details of the twd.bz domain.

It directed me to www.publicdomainregistry.com which is again a domain registration site. I haven't seen such a whois data. I tried searching the domain in PublicDomainRegistry itself.

What I found was a real man's data, And a truecaller search of that Mobile number gave me a name. I could not find such a person in google as he may not be famous one.

Continuing with Google, I came across this blog post from Twilio and came to know that SMS uses different encoding methods. The most popular method as per Google was GSM 3.38.

Wikipedia lists three encoding that can be used to support GSM 3.38 (Highlighted in the image). I was left with 3 ways to find the secret message sent for me. Within some searches, I found this online tool posted in a forum by someone.Tried decrypting with type set to 7-bit encoding.
This time not even the URL appeared, thinking whether I am going in a wrong direction, tried the another type UCS2.

Finally, decoded the message and after all it was just a Hamam Soap advertisement and I have wasted hours in it.

But why the URL didn't work?

I got the URL correct in the first attempt itself. I won't been involved if had seen a Hamam soap banner in the website. May be something wrong with the site or else the message may be sent in wrongly as the site is not ready yet. I thought of at-least sending a feedback to hamam as I would not feel, I have wasted hours. The message had a keyword Hamam Green NewYear and on a simple google search, I found that it is a green initiative by Hamam and they are busy planting neem trees across TamilNadu starting from April 14th.

I may have ignored the message, if it was normal. After this much googling, I have found their initiative and followed their Facebook page. Even their page has the same wrong URL. The correct one is http://hamam.twd.bz

Somehow my phone didn't got the Message header and it couldn't decode it as the header was missing.Made me spent hours on it.

Everyone who works under IT sector will one day face what so called as a Layoff. Though we can't escape from its clutches yet few steps can buy us some time. Show you

It was just another day until I saw that meme about WannaCry while scrolling the Feed. The Malware was popular enough for sharing a meme, but I was unaware of it. Immediately searched